Lesson 45 min. Students will know how to use social studies terminology correctly. Vocabulary includes terms, key people, and events of the Reconstructon period. Brought to you by The Portal to Texas History 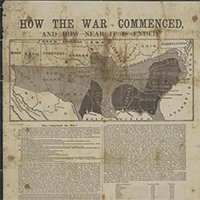 After this introduction to the unit vocabulary, students will know how to use social studies terminology correctly, including black codes; carpetbaggers; freedmen; loyalty oath; poll tax; sharecropping; Juneteenth. Vocabulary includes terms, key people, and events of the Texas Revolution.

black codes
laws passed in the south that discriminated against Freedmen, including laws on curfews, laws regulating work and pay, and other restrictions placed on the freedoms of African Americans
carpetbaggers
an insulting word for Northerners who moved to the South after the war. Those who opposed reconstruction believed carpetbaggers came to get rich or gain political power
convict leasing
the practice of leasing inmates to perform forced labor for individuals or private companies
discrimination
unfairly treating a person or groups of people differently from other people based on characteristics such as race, age or gender
emancipation
the freeing of enslaved people by the authority that held them
loyalty oath
a promise or oath required of all who fought or aided the Confederacy, promising to never fight against the U.S.
martial law
military rule imposed on citizens instead of civil law and government. The South was placed under martial law after the Civil War
poll tax
a voting qualification under the 15th Amendment that required a person to pay a tax in order to register to vote
reconstruction
the post-Civil War period from 1865-1876. The U.S. readmitted the southern state to the Union, rebuilding the nation after the Civil War
scalawags
insulting name for white southerners who supported reconstruction efforts
sharecropping
a system of agriculture in which a landowner allowed a tenant farmer to use land in exchange for a share of the crop

Edmund Davis
appointed Governor during Reconstruction under martial law and later elected Governor, serving from 1870-1874
Freedmen’s Bureau
an agency set up in 1865 to assist formerly enslaved people in obtaining relief, land, jobs, fair treatment, and education
Ulysses S. Grant
18th President of the U.S. elected in 1868, he campaigned on his Civil War experience as commanding general of the Union forces
Andrew Johnson
17th President of the U.S., he assumed this role after the assassination of Lincoln, serving 1865-1869
Abraham Lincoln
16th President of the U.S., serving during the Civil War. He emancipated enslaved people, and was assassinated in 1865
Ku Klux Klan
a secret terrorist organization in the U.S. made up of white people who are opposed to people of other races

13th Amendment
officially abolished slavery in all parts of the U.S. after the Civil War
14th Amendment
granted U.S. citizenship to all formerly enslaved people
15th Amendment
gave voting rights to all African American men
“Juneteenth”
a holiday celebrated on June 19th to commemorate the emancipation of enslaved people in the US. First celebrated in Texas in 1865, Juneteenth became a federal holiday in 2021 and is now celebrated across the U.S.