Lesson 60 min. The era of Reconstruction, overlapping with the end of the Civil War, was met with many obstacles by the government as they sought to reunite the nation. This lesson will focus on the aftermath of the Civil War in Texas including the political, economic, and social effects that the war had on Texas. Brought to you by The Portal to Texas History 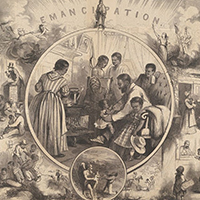 Following the Civil War, Texas as well as the other Southern states, was faced with many challenges in the aftermath of war. Property damage, loss of wages and workforces sent the Texas agrarian economy into a downturn while the government balanced on the brink of collapse. An influx of migrants in search of land and new life provided a stark contrast to the outlook of the newly freed men and women who were met with lingering injustices and limited opportunities.