Reconstructon: The Challenges of Reunification

Lesson 120 min. Reconstruction: The Challenges of Reunification focuses on how the United States proceeded in reinstituting states such as Texas back into the Union and the conditions that were in place to deal with seceding states. Brought to you by The Portal to Texas History 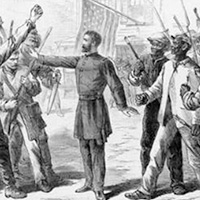 This lesson will introduce students to the key concepts, important events, and issues that shaped the history of Texas during the period of Reconstruction following the Civil War. This lesson will be centered on how the United States proceeded in reinstituting states such as Texas back into the Union and the conditions that were in place to deal with seceding states. An emphasis will be placed on important amendments such as the 13th, 14th, and 15th amendments so that students can gain an understanding of how African Americans became free and equal citizens in Texas. The aftermath of the war itself – and therefore questions of “what becomes of the ex-Confederates?” and “how do you bring a seceded state like Texas back into the Union?” – will also be central to the challenges of Reconstruction, which were all about who would hold power in post-Civil War Texas.

Reconstructon: The Challenges of Reunification by UNT Libraries is licensed under a Creative Commons Attribution-NonCommercial 4.0 International (CC BY-NC 4.0) license .